This article includes research findings that have not yet been peer-reviewed. Therefore, the results are considered preliminary and should be interpreted as such. Learn more about the role of the peer review process in research here. For more information, contact the cited source.

The COVID-19 pandemic has shown the entire world how critical virus research can be. Years of work investigating SARS and other coronaviruses proved to be the invaluable foundation that allowed researchers to determine the structure of the SARS-CoV-2 spike protein and rapidly develop vaccines that have saved countless lives.

In many ways, the field of virology is undergoing a renaissance, with many fundamental techniques evolving rapidly in the last ten years. A significant contributor to this, in addition to growth catalyzed by a global pandemic, is the standardization and commercialization of cryogenic sample preservation and analysis. In this article, we will discuss the integration of cryo-electron microscopy (cryo-EM) into virology research and the unique challenges of working with dangerous virus species in biosafety laboratories.

Historically, cell and virus samples have been preserved by chemical fixation or crystallization. When analysis of the entire virus was impractical or impossible, the sample was split into key proteins for in-depth structural analysis. While these techniques have provided valuable insights into the structure, behavior, and function of viruses, they are divorced from the native context in which the virus acts. And while this was acceptable for isolated, mature virus particles, it left us with gaps in our understanding of virus-cell interactions, particularly once the virus has internalized into the cell.

Reprogramming of the cellular machinery for virus replication is an intricate and highly transient process. Even if intracellular imaging with chemical fixation is possible, it is challenging to capture these fleeting events, particularly in enough detail to tease out what is going on.

In cryogenic sample preparation, aqueous samples are quickly frozen to preserve them in a suspension of amorphous (vitreous) ice. Unlike crystalline ice, which expands as it forms, glassy ice molecules generally remain in their liquid phase positions, preserving the surrounding molecular structure of the sample. This essentially takes a “snapshot” of the sample in a near-native state.

For virus analysis, cryopreservation has been instrumental in the development of a variety of electron microscopy techniques, widely described as cryo-EM. The most common of these is single particle analysis, whose developers received the 2017 Nobel Prize in Chemistry. Single particle analysis uses averaging to produce 3D molecular structures from hundreds of 2D transmission electron microscopy (TEM) images. of different copies of the sample, randomly oriented within the ice. Generally speaking, it is considered complementary to X-ray crystallography as it can easily generate structures for proteins and complexes that are difficult to crystallize.

Although single particle analysis has filled a vital niche in the world of structural analysis, it is still performed on fragmented systems isolated from their physiological context. Fortunately, this need in the place observation can be accommodated by another complementary cryo-EM technique, cryo-electron tomography (cryo-ET).

In electron tomography, a thin sample is progressively tilted and viewed within a TEM. These images represent different cross sections of the sample, which can be combined into a single, high-resolution 3D representation of the sample. Whereas single-particle analysis relies on many copies of the same target molecule to capture its various orientations, tomography must use a precision stage that reliably tilts a single sample in discrete increments.

In particular, this means that cryo-ET can be performed on a segment of a cryogenically preserved whole cell. While early cryo-ET experiments were limited to inherently thin samples (or thin regions of thicker samples), the advent of various cryo-thinning techniques made it possible to cut “windows” directly into frozen cells to observe their intracellular machinery.

For virology, this presents a unique opportunity to catch elusive viruses red-handed after they enter the cell cytoplasm. In particular, cryo-ET has been used to study the replication behavior of coronavirus within cells. In a collaboration led by Leiden University Medical Center, the researchers were able to visualize the virus-induced formation of double-membrane vesicles that are used to house viral RNA replication. This included pore structures on the surface of the vesicles that are likely responsible for RNA transport, marking them as potential drug targets. 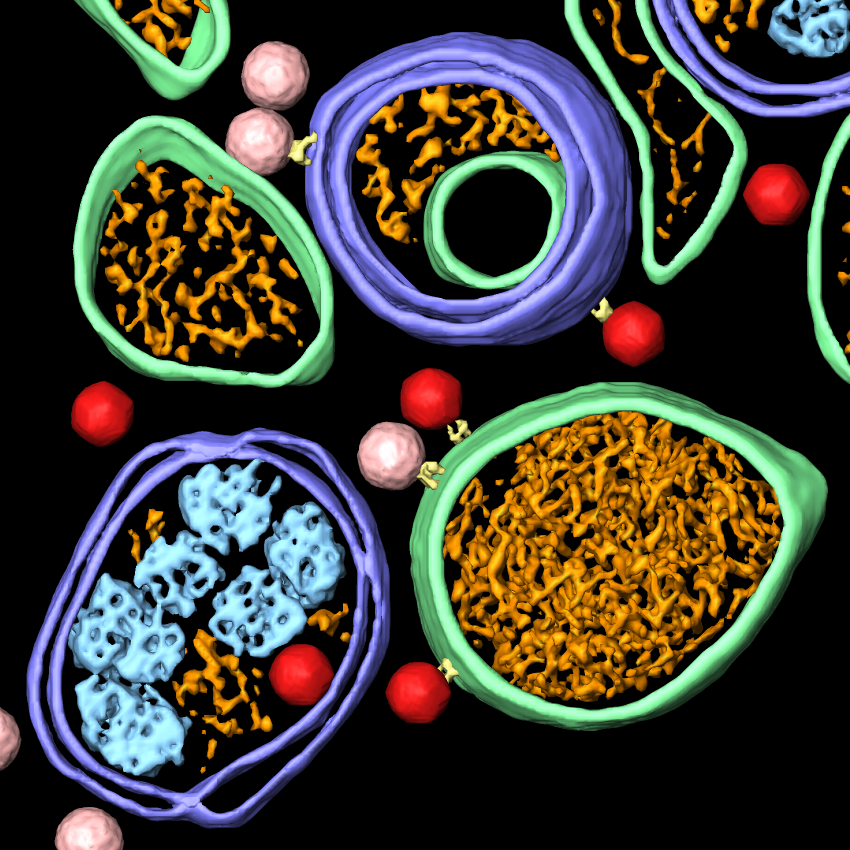 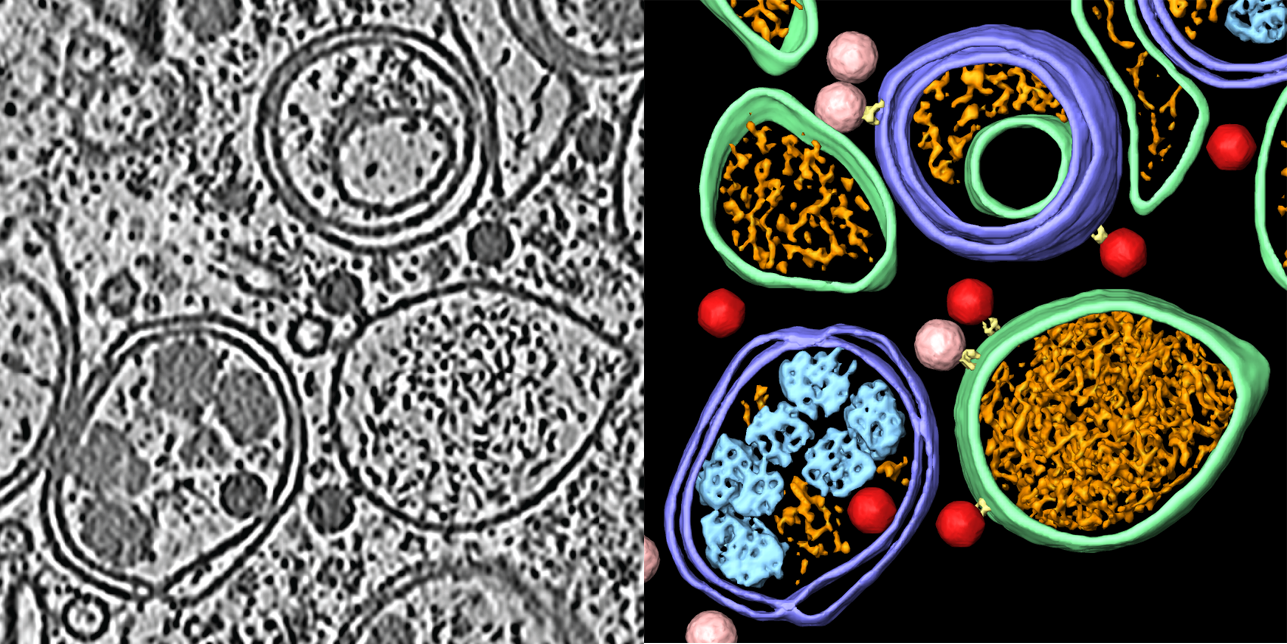 Biosecurity laboratories: working with the enemy

Cryo-ET of pathogenic whole viruses and virus-cell interactions is naturally of great interest to researchers due to the clear and present danger that viral pathogens pose to human health worldwide.

However, biosafety laboratories have defined discrete levels of danger that various virus samples present. Work with pathogens that pose a disease risk requires a higher biosafety containment facility, unless the work is limited to protein isolates or inactivated samples. To ensure the safety of everyone who works in these facilities, researchers must take specific precautions and adhere to special protocols, including different instrument requirements (such as established levels of decontamination). As a result, high-end cryo-EM instruments are not yet commonly found in these higher biosafety level facilities.

However, some laboratories have shown promising results in their exploration of pathogenic species. For example, the Carlson research group at Umeå University has used cryo-ET to study poliovirus as a model enterovirus. In their work, they were able to capture much of the virus’ replication cycle inside its host cell. They looked at the ways in which the virus transformed the intracellular environment to facilitate viral replication. By visualizing these discrete mechanisms, they were also able to see the interplay between cellular defense mechanisms and viral assembly. For example, suppression of natural autophagy factors allowed the virus to continue to replicate despite cellular triggers to destroy them. This work, made possible only by cryo-ET, breaks exciting paths not only in therapeutic development, but also in our fundamental understanding of host-pathogen interactions.

“Imagine following a virus from its contact with a host, to cell attachment, to replication and release. Just a decade ago this may have been considered a wishful dream, but we are steadily moving closer to a more complete understanding of viral behavior.” – Selma Dahmane, Marie Skłodowska-Curie Postdoctoral Fellow, University of Umea

Cryo-ET opens the door to new insights both into “known” viruses whose structures might already have been determined, and into the plethora of viruses that have yet to be studied. Many questions about their life cycles and interactions with host cells remain unanswered. In addition to determining the structure of the virus itself, cryo-EM, including cryo-ET, allows a close look at the life cycle of the virus within a host cell, eg, entry, replication, assembly, and release. There is also much to learn about how cells respond to and defend against viral infection. Similarly, studying the effects of drugs or drug candidates on virus life cycles and cellular defenses could better prepare us against the next big virus.

Virology is poised to enter a new era of discovery with near-native state observations enabled by cryopreservation and analysis. Cryoelectron tomography, in particular, can provide information that bridges our current knowledge of molecular structure and cell interaction. The installation of cryo-electron microscopes in higher-level biosafety facilities would allow a broader range of virus species to be investigated. With a comprehensive, multi-scale understanding of virus action, we can design better, more targeted, and efficient treatments. Accessing this information will not be without its challenges, but the joint effort of experimenters and instrument developers will surely propel us into this exciting future.